This is an old orphan story of mine, one that never found a home anywhere. 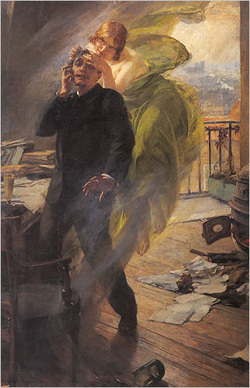 "Don't you see, Singer, that you can't just cut yourself off here. It's one thing to go out collecting folk tales. Quite another to live like some kind of medieval lord. Ivory towers indeed."
"I think the solitude will do me good. I've done a good bit of walking already. Contemplation. The thing is starting to take shape."
"But haven't you been listening? Your commitment is to this generation. They are your audience, not the dead who cannot hear. Do you care nothing for the developments in art and philosophy I've been expounding this past hour?"
"I will write regardless of the tides of fashion. A long poem, a narrative poem, the work I have set myself."
"An epic? The mode is already outdated."
The two men were seated facing each other in the shadowed hall of a tower house. It was a sixteenth-century building, and there was very little, either in the furniture or ornaments, to break the spell of an earlier age. The only source of light was from the red coals of a fireplace. In their bright glow, Myers's face appeared luminous, like a stained-glass saint's. He had features of a severe cut, with a tonsured forehead and upright white collar, making him resemble a clergyman. The second man, who had retreated more into the shadows, was dressed in the Pre-Raphaelite manner, with silk kerchief tied around his neck and a ram’s head cane at his knee.
The man with the priestly look spoke again. "Look, Singer, we've been friends since Wynyard days. It is natural, therefore, that I be concerned for your wellbeing. Your mind is utterly made up, I can see that. But I just can't let go of the thing. Will you lock yourself up here until the phantoms start to appear? Will you go out looking for fairy rings? It's your appetite for supernaturalism that worries me. These peasants are liable to get under the skin, with their fancy and nonsense."
"There's the matter of inspiration..."
"Is it essential that you believe in fairies and goblins, in the whole variety of peasant gobbledygook, if you are to write the thing?"
Singer laughed. "You are trying to make me come out and say it! All right, I believe in hobgoblins. I have gathered enough evidence for their existence."
"Myth, you know, Singer, contains its own truth. The moderns know that. You don't have to abandon it all and regress into romanticism. One can profess a belief in myth without actually believing in the literal details – that Hercules took the weight of the world on his shoulders, in Atlas’ stead, or that Siegfried’s bathing in dragon’s blood gave him the speech of birds. The truth of the tale is another thing. But without cultivating detachment? Without some ironic distance to keep things in their proper perspective?"
Singer came forth from the shadows. His eyes gleamed white; his face had an obsessive look. He blew out a cloud of tobacco smoke into the stale air of the tower and looked up at the stairwell, hidden in darkness.
"There's something I need to tell you."
"Why do I sense foreboding in those words?"
"I have a patron."
Myers leaned back in surprise. "So there's money in this?"
"Not just money. Food. Bounty."
"Hand to mouth? Does he, or she, give you your daily bread in exchange for a few lines of verse? I see the medieval temperament has overtaken you completely. Who is this mysterious figure?"
"I do not know, exactly."
"You've not met?"
"I've some contact with his, shall we say, representative. He gives me money - no final figure has been disclosed, but it is surely enough to live in comfort for the rest of my days. And food too."
"Some local landowner, then. A landed gent, with a taste for high, lofty verse. They are always sentimental. Need I say you are selling your talent?"
"I came here, as I said, to write an epic. He has commissioned such a work."
"I see. Then you will dwindle into obscurity, your work locked away in some private library, unknown to the world. Well, if that is what you want. I cannot say I blame you, from a certain point of view. There is no money in verse these days. One has to slog it away at the office, or in the lecture hall. I myself could not survive otherwise. Still, I hold out a hope that
when all this is over, you will return to us, when this intoxication has finally left your blood. Now I must be going. I regret I cannot stay the night, but I have another engagement as I said, and besides I fear I may come down with a similar affliction. Wait till I tell the others. A watchtower. A wood and a lake. No other habitation in sight. I fear we have lost you, Singer."
Farewells were exchanged. Myers, seeming over-eager to retrieve his things and be gone, disappeared into the gloomy dark, the drone of his motor car cutting through the enveloping silence of the trees. Singer, left alone at the entrance of the tower, shut the door and returned to the fireplace to think.


"Tho' much is taken, much abides; and tho'
We are not now that strength which in old days
Moved earth and heaven; that which we are, we are"
Tennyson, Ulysses.